In face recognition, triplet loss is used to learn good embeddings (or “encodings”) of faces. If you are not familiar with triplet loss, you should first learn about it by watching this coursera video from Andrew Ng’s deep learning specialization.

Triplet loss is known to be difficult to implement, especially if you add the constraints of building a computational graph in TensorFlow.

In this post, I will define the triplet loss and the different strategies to sample triplets. I will then explain how to correctly implement triplet loss with online triplet mining in TensorFlow.

About two years ago, I was working on face recognition during my internship at Reminiz and I answered a question on stackoverflow about implementing triplet loss in TensorFlow. I concluded by saying:

Clearly, implementing triplet loss in Tensorflow is hard, and there are ways to make it more efficient than sampling in python but explaining them would require a whole blog post !

All the code can be found on this github repository.

Why not just use softmax?

The triplet loss for face recognition has been introduced by the paper FaceNet: A Unified Embedding for Face Recognition and Clustering from Google. They describe a new approach to train face embeddings using online triplet mining, which will be discussed in the next section.

Triplet loss in this case is a way to learn good embeddings for each face. In the embedding space, faces from the same person should be close together and form well separated clusters.

Definition of the loss 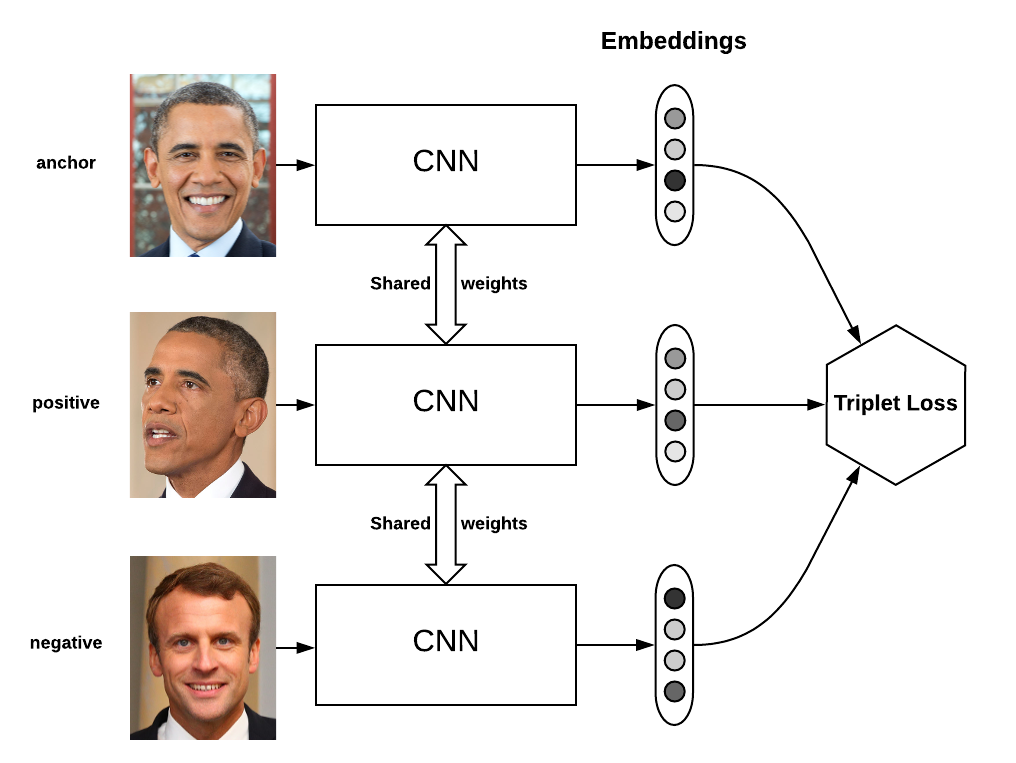 The goal of the triplet loss is to make sure that:

However, we don’t want to push the train embeddings of each label to collapse into very small clusters. The only requirement is that given two positive examples of the same class and one negative example, the negative should be farther away than the positive by some margin. This is very similar to the margin used in SVMs, and here we want the clusters of each class to be separated by the margin.

To formalise this requirement, the loss will be defined over triplets of embeddings:

Based on the definition of the loss, there are three categories of triplets:

Each of these definitions depend on where the negative is, relatively to the anchor and positive. We can therefore extend these three categories to the negatives: hard negatives, semi-hard negatives or easy negatives.

The figure below shows the three corresponding regions of the embedding space for the negative. 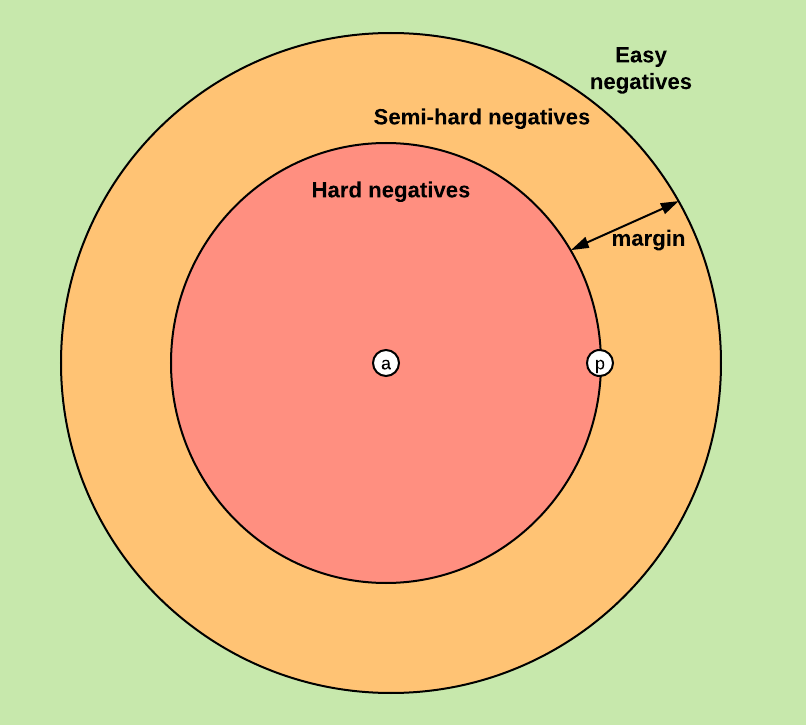 The three types of negatives, given an anchor and a positive

Choosing what kind of triplets we want to train on will greatly impact our metrics. In the original Facenet paper, they pick a random semi-hard negative for every pair of anchor and positive, and train on these triplets.

We have defined a loss on triplets of embeddings, and have seen that some triplets are more useful than others. The question now is how to sample, or “mine” these triplets.

The first way to produce triplets is to find them offline, at the beginning of each epoch for instance. We compute all the embeddings on the training set, and then only select hard or semi-hard triplets. We can then train one epoch on these triplets.

Concretely, we would produce a list of triplets $(i, j, k)$. We would then create batches of these triplets of size $B$, which means we will have to compute $3B$ embeddings to get the $B$ triplets, compute the loss of these $B$ triplets and then backpropagate into the network.

Overall this technique is not very efficient since we need to do a full pass on the training set to generate triplets. It also requires to update the offline mined triplets regularly.

Online triplet mining was introduced in Facenet and has been well described by Brandon Amos in his blog post OpenFace 0.2.0: Higher accuracy and halved execution time.

The idea here is to compute useful triplets on the fly, for each batch of inputs. Given a batch of $B$ examples (for instance $B$ images of faces), we compute the $B$ embeddings and we then can find a maximum of $B^3$ triplets. Of course, most of these triplets are not valid (i.e. they don’t have 2 positives and 1 negative).

This technique gives you more triplets for a single batch of inputs, and doesn’t require any offline mining. It is therefore much more efficient. We will see an implementation of this in the last part.

Triplet loss with online mining: triplets are computed on the fly from a batch of embeddings

Whenever we have three indices $i, j, k \in [1, B]$, if examples $i$ and $j$ have the same label but are distinct, and example $k$ has a different label, we say that $(i, j, k)$ is a valid triplet. What remains here is to have a good strategy to pick triplets among the valid ones on which to compute the loss.

A detailed explanation of two of these strategies can be found in section 2 of the paper In Defense of the Triplet Loss for Person Re-Identification.

They suppose that you have a batch of faces as input of size $B = PK$, composed of $P$ different persons with $K$ images each. A typical value is $K = 4$. The two strategies are:

According to the paper cited above, the batch hard strategy yields the best performance:

Additionally, the selected triplets can be considered moderate triplets, since they are the hardest within a small subset of the data, which is exactly what is best for learning with the triplet loss.

However it really depends on your dataset and should be decided by comparing performance on the dev set.

A naive implementation of triplet loss

In the stackoverflow answer, I gave a simple implementation of triplet loss for offline triplet mining:

The network is replicated three times (with shared weights) to produce the embeddings of $B$ anchors, $B$ positives and $B$ negatives. We then simply compute the triplet loss on these embeddings.

This is an easy implementation, but also a very inefficient one because it uses offline triplet mining.

All the relevant code is available on github in model/triplet_loss.py.

There is an existing implementation of triplet loss with semi-hard online mining in TensorFlow: tf.contrib.losses.metric_learning.triplet_semihard_loss. Here we will not follow this implementation and start from scratch.

As the final triplet loss depends on the distances $d(a, p)$ and $d(a, n)$, we first need to efficiently compute the pairwise distance matrix. We implement this for the euclidean norm and the squared euclidean norm, in the _pairwise_distances function:

To explain the code in more details, we compute the dot product between embeddings which will have shape $(B, B)$. The squared euclidean norm of each embedding is actually contained in the diagonal of this dot product so we extract it with tf.diag_part. Finally we compute the distance using the formula:

One tricky thing is that if squared=False, we take the square root of the distance matrix. First we have to ensure that the distance matrix is always positive. Some values could be negative because of small inaccuracies in computation. We just make sure that every negative value gets set to 0.0.

The second thing to take care of is that if any element is exactly 0.0 (the diagonal should always be 0.0 for instance), as the derivative of the square root is infinite in $0$, we will have a nan gradient. To handle this case, we replace values equal to 0.0 with a small epsilon = 1e-16. We then take the square root, and replace the values $\sqrt{\epsilon}$ with 0.0.

In this strategy, we want to compute the triplet loss on almost all triplets. In the TensorFlow graph, we want to create a 3D tensor of shape $(B, B, B)$ where the element at index $(i, j, k)$ contains the loss for triplet $(i, j, k)$.

Finally, we set to $0$ the loss of the invalid triplets and take the average over the positive triplets.

Everything is implemented in function batch_all_triplet_loss:

The implementation of _get_triplet_mask is straightforward, so I will not detail it.

In this strategy, we want to find the hardest positive and negative for each anchor.

To compute the hardest positive, we begin with the pairwise distance matrix. We then get a 2D mask of the valid pairs $(a, p)$ (i.e. $a \neq p$ and $a$ and $p$ have same labels) and put to $0$ any element outside of the mask.

The last step is just to take the maximum distance over each row of this modified distance matrix. The result should be a valid pair $(a, p)$ since invalid elements are set to $0$.

The hardest negative is similar but a bit trickier to compute. Here we need to get the minimum distance for each row, so we cannot set to $0$ the invalid pairs $(a, n)$ (invalid if $a$ and $n$ have the same label).

The final step is to combine these into the triplet loss:

Everything is implemented in function batch_hard_triplet_loss:

This is especially important for tricky functions like this that are difficult to implement in TensorFlow but much easier to write using three nested for loops in python for instance. The tests are written in model/tests/test_triplet_loss.py, and compare the result of our TensorFlow implementation with the results of a simple numpy implementation.

To check yourself that the tests pass, run:

Even with the tests above, it is easy to oversee some mistakes. For instance, at first I implemented the pairwise distance without checking that the input to the square root was strictly greater than $0$. All the tests I had passed but the gradients during training were immediately nan. I therefore added test_gradients_pairwise_distances, and corrected the _pairwise_distances function.

To make things simple, we will test the triplet loss on MNIST. The code can be found here.

To train and evaluate the model, do:

Once training is complete (or as soon as some weights are saved in the model directory), we can visualize the embeddings using TensorBoard. To do this, run:

And run TensorBoard in the experiment directory:

These embeddings were run with the hyperparameters specified in the configuration file experiments/base_model/params.json. It’s pretty interesting to see which evaluation images get misclassified: a lot of them would surely be mistaken by humans too.

TensorFlow doesn’t make it easy to implement triplet loss, but with a bit of effort we can build a good-looking version of triplet loss with online mining.

The tricky part is mostly how to compute efficiently the distances between embeddings, and how to mask out the invalid / easy triplets.

Finally if you need to remember one thing: always test your code, especially when it’s complex like triplet loss.